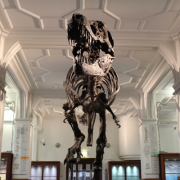 Originally this screening of Jurassic Park was due to be held in the appropriately atmospheric surrounds of Manchester Museum’s fossil gallery, with film fans set to get closer than ever to walking with the dinosaurs.

Unfortunately, due to you-know-what, the original screening has been cancelled, but Manchester Museum are instead having a Jurassic Park ‘watchalong’. So now you will be able to see the film from the comfort of behind your own sofa.

To join in, press ‘play’ at 6:30pm on Thursday 23 April and watch Jeff Goldblum and Laura Dern star as dinosaurs run amok in Steven Spielberg’s original 90s film about a revolutionary new theme park. There will be expert commentary from Matthew Cobb, University of Manchester and Will Tattersdill, University of Birmingham throughout the film on Twitter using the hashtag #DNADay2020. You are encouraged to post your own comments and questions. There will be a final Q&A on Twitter after the film has finished.

Licensing issues mean that The Museum cannot stream the film directly, so you will need to source your own copy of the movie.

Programmed as part of DNA Day in partnership with Double Helix History, Creative Manchester and the University of Manchester.