Climate Change: Why complexity appears to hinder -- but may actually help -- humanity to act? 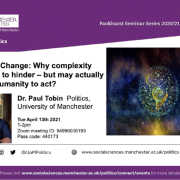 Climate Change: Why complexity appears to hinder -- but may actually help -- humanity to act?

Scientists first realised that climate change could pose a threat to humanity over a century ago. But taking effective action is a highly political challenge. For example, some politicians and countries have feared – or at least, claimed to fear – being exploited if they take bold decisions on climate change when others do not. At times, it can feel that climate change is too complex a problem to address. In this Pankhurst seminar, targeted specifically towards undergraduate students, Dr Paul Tobin will explain why complexity may actually help in the response to climate change. Providing examples from around the world, and also introducing his own latest research project, this seminar will tell the story of where humanity is up to on climate change, and where we may go next.

Politics Pankhurst Seminars are research talks aimed at our students in which members of staff in Politics talk about their own research in an informal and accessible way.