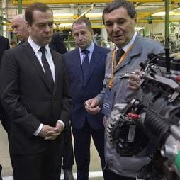 The Soviet Union was a leader in scientific innovation. Since 1991 the Soviet scientific legacy has faded, despite ambitious government efforts to fund R&D and reverse Russia's slide into a commodity-exporting economy. Only a handful of Russian firms are globally competitive in high-tech fields. Russia's failure to develop an innovation-based economy has deep roots in Russian culture and the institutional legacies of the Soviet period, exacerbated by certain pathologies in Russia's post-Soviet political economy.

Peter Rutland, Professor of Government at Wesleyan University, US, was awarded the prestigious Leverhulme Visiting Professorship at Manchester for 2016. He authored two books, The Politics of Economic Stagnation in the Soviet Union (Cambridge University Press, 1992) and The Myth of the Plan: Lessons of Soviet Planning Experience (Hutchinson, 1985), alongside with many other publications. He also edited Business and the State in Contemporary Russia (Westview Press, 2000). Since 2013 he has been editor in chief of Nationalities Papers, the journal of the Association for the Study of Nationalities (http://nationalities.org), and an associate editor of Russian Review. He blogs about nationalism around the world at Nationalism Watch (https://nationalismwatch.com).