A Tailor is sewing the dress of Tipu Sultan 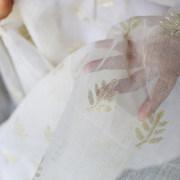 In this performance, Nupur uses handwoven muslin-jamdani as a signifier of power and consumption, embedded in the contested and violent history of the subcontinent. A highly revered, translucent cotton cloth from Bengal, muslin embellished with jamdani (a type of woven pattern) has been celebrated over the centuries for its mesmerising allure and feather-light texture, often compared to moonlight or the morning dew. This fine cloth made from a labour-intensive process historically adorned the richest of rulers in the subcontinent and attracted a lucrative overseas trade.

This performance will take place alongside Nupur’s works on display in the exhibition, Beyond Borders, connecting the rich and complex history of muslin and jamdani to the subcontinent. Growing up in Bangladesh Nupur was aware of how muslin had been celebrated across the world but equally, was deeply affected by the legacies and impact of British colonialism. “There are entire generations of Bengali men and women who have grown up with legendary stories of how the British cut off the thumbs of weavers so they could no longer produce muslin and were forced to buy British goods. This history constantly hurts me”.

During the 18th century the British East India Company secured trading rights in Bengal and strictly controlled the production of muslin. The more they controlled, the more power they obtained and rival rulers in the subcontinent were seen as a continuous threat to their dominance.

One such ruler was Tipu Sultan, a fearless and great ruler of Mysore in Southern India. During his reign (1782-99) he built magnificent palaces and amassed a great fortune in jewellery, precious gems and ornaments. He was also known for his love of fine clothing including the finest muslins and jamdanis from Bengal. In 1799 Tipu Sultan was killed in the Battle of Srirangapatna (Seringapatam) by the British East India Company which was heralded by them as a triumph. The officers subsequently looted his palaces, resulting in colonial booty eventually making its way into a great number of British national collections where they can still be seen today.

Nupur uses muslin-jamdani as a medium to locate and express these individual and collective memories across time and place. This fine texture conceals and reveals, dissects and unites the space we occupy. Situating the performance in the textile gallery at the Whitworth, Nupur translates these conflicted histories, working silently and industriously, oscillating between the absence and presence, the marginalised craft-maker and glorified victor.