Guardian Live: The importance of newsroom diversity, with Gary Younge 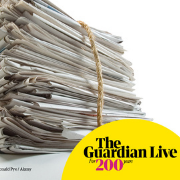 The John Rylands Research Institute and Library holds the entire archive of the Manchester Guardian. In this series of events to mark the Guardian bicentenary, panels of UoM academics and special guests will each discuss an item from the archive, its relevance to today’s news and media, and how it may influence our future.

For this livestreamed event, we will be taking a closer, more critical, look at the issues surrounding representation in newsrooms. According to the Sutton Trust, 80% of news editors attended private school, with only 11% of journalists being from working class backgrounds, and 0.2% being Black. Combined with Women in Journalism’s 2020 research into news organisations’ lack of diversity, this paints a startling portrait of who decides what is newsworthy and how it is reported.

Guardian deputy Opinion editor Joseph Harker will chair a panel - including Professor of Sociology at UoM and former Guardian editor-at-large Gary Younge and gal-dem lifestyle editor Niellah Arboine - to peel back the statistics and ask: with decision-makers in the media being predominantly white, male and privately educated, how can we be certain that the news we’re consuming is the whole story, rather than a carefully constructed narrative that perpetuates long-standing myths? More speakers to be announced.

Role: Professor of Sociology at UoM and former Guardian editor-at-large