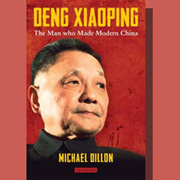 Professor Michael Dillon, one of the UK’s leading authorities on modern China, presents an original and full biography of this charismatic leader who has played a huge role in China's modern history.

Deng Xiaoping is a huge figure in China’s modern history, credited for the reforms of the late 1970s that put China on the path to spectacular economic growth and development. This year China have been celebrating the 110th anniversary of his birth and the Chinese leadership are increasingly identifying themselves with his political legacy (many say that Xi Jinping wants to put himself on par with Deng as a leader). Ironically, as the creator of the ‘one country, two systems’ formula for Hong Kong, Deng has also become a figurehead for Hong Kong citizens protesting against the growing threat of China to its autonomy.

Based on newly released Chinese language sources (including recollections from friends and colleagues of Deng) Michael Dillon, one of the UK’s leading authorities on modern China, presents an original and full biography of this charismatic leader and the first to come out in recent years. He illustrates how Deng’s life of struggle and survival shaped his political career and captures something of the complexity and contradictoriness of Deng - a committed communist who brought in economic liberalization but who fell dramatically from grace in the wake of the violently crushed protests in Tiananmen Square.

Biography: Prof Michael Dillon was founding Director of the Centre for Contemporary Chinese Studies at the University of Durham, where he taught Modern Chinese History. He is a Fellow of the Royal Historical Society and the Royal Asiatic Society and was Visiting Professor at Tsinghua University in Beijing in 2009. He is the author of China: A Modern History (I.B.Tauris).