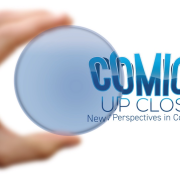 Why Comics? What Can They Do? The Lakes International Comic Art Festival in partnership with Creative Manchester and Sheffield Hallam University invite you to join a day packed with new and exciting perspectives on comics. Bringing together leading academics, world renowned comic creators and comic advocates from across the globe, the day will present new research and thinking on comics.

Contributors will include: Dave McKean, one of the UK’s leading illustrators, photographers, comic book artists and filmmakers reflecting on new technological advances, especially Artificial Intelligence, and how these are redefining what it is to create, to draw and consume comics; Benoit Peeters, previously the UK’s first professor of comics at Lancaster University, currently professor at the Collège de France in Paris and also a writer, thinker and the creator of The Obscure Cities comic series with the Belgian artist François Schuiten, exploring what makes comics special and particular in the world of arts and culture.