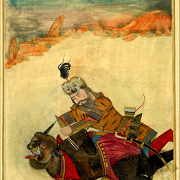 British consolidation in South Asia at the turn of the 19th century witnessed the resistance of Tipu Sultan, the renowned ruler of Mysore. His call for an anti-British alliance, among others with Qajar Iran, came at a time when Iran was facing Russian expansionist pressure on its northern borders. British diplomatic efforts to offset Tipu Sultan, which included Captain Malcolm’s first mission to Iran in 1800 straight from the campaign that destroyed Tipu, triggered a race for access to the Qajar court, which in due course turned Britain into a cunning mediator in the Russo-Persian conflict. Tipu’s appeal, despite its fascinating Perso-Shi’i undertone shared with Qajar Iran, remained a mere potentiality overshadowed by European race for domination and the harsh realities of global rearrangement.