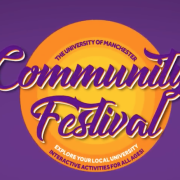 This event is a part of the Community Festival held at the University of Manchester.

Founded from the philanthropy of wealthy Manchester merchants, Owens College captured the energy and spirit of the industrial revolution. Its successor, the Victoria University of Manchester, helped establish the style of the modern university with its secularist approach and pursuit of research alongside teaching.

The tour traces the development of the University into the twentieth century and visits key sites of discovery including where Ernest Rutherford first split the atom and where Alan Turing helped lay the foundations of modern computing.

The tour is outside and lasts around 45 minutes.