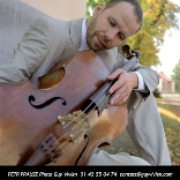 Quatuor Danel are joined by cellist Petr Prause (Senior Tutor in Cello and Chamber Music at the RNCM), for a performance of two late quintets. Mendelssohn’s Op.87 was composed in 1845, when the composer was 36 years old. Schubert’s Quintet, D.956 is widely regarded as one of the finest examples of chamber music ever composed. It was completed two months before the composer’s death in 1828.