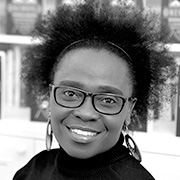 UNESCO supports mother language and multilingual education through International Mother Language Day (IMLD). The overall objective of the Day is to contribute to promoting not only linguistic diversity but cultural diversity as well.

As part of the International Mother Language Day celebrations we are delighted to welcome Ugandan novelist and short story writer Jennifer Nansubuga Makumbi. Her short story Let’s Tell This Story Properly won the 2014 Commonwealth Short Story Prize. Her first novel, Kintu, was first published in Kenya in 2014 and is a modern classic, multi-layered narrative that explores Uganda’s national identity through the cursed bloodline of the Kintu clan.

In an ambitious tale of a clan and a nation, Makumbi weaves together the stories of Kintu's descendants as they seek to break from the burden of their shared past and reconcile the inheritance of tradition and the modern world that is their future.

Kintu won the Kwani? Manuscript Project in 2013 and was longlisted for the Etisalat Prize in 2014. Jennifer Makumbi lives in Manchester with her husband, Damian, and her son, Jordan.

Ellah Wakatama Allfrey is a London-based editor and critic and is the founding Publishing Director of The Indigo Press. A former Deputy Editor of Granta and former Senior Editor at Jonathan Cape, Random House, she has been a judge for the Dublin International Literary Award, and the Man Booker and Caine Prizes. She was Visiting Professor & Global Intercultural Scholar at Goshen College, Indiana and was Guest Master for the 2016 Gabriel Garcia Marquez Foundation international journalism fellowship in Cartagena, Colombia. Her journalism has appeared in The Telegraph, The Guardian and The Observer and she is a regular contributor to the book pages of NPR and BBC Radio 4’s Saturday Review.

This event will be introduced by Geoff Ryman, author and Honorary Senior Lecturer in Creative Writing at The University of Manchester and is presented in partnership with Manchester Literature Festival.