Howard Jacobson: Shylock Is My Name - SOLD OUT 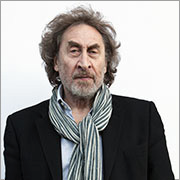 PLEASE NOTE THAT THIS EVENT IS NOW SOLD OUT **

Man Booker Prize-winner Howard Jacobson’s is one of the authors commissioned as part of The Hogarth Shakespeare programme to write prose ‘retellings’ of Shakespeare’s plays for the modern reader in the 400th anniversary year of Shakespeare’s death.

The new novel Shylock Is My Name, published in February 2016, is inspired by Shakespeare's most performed play, The Merchant of Venice and bends time to its own advantage as it asks what it means to be a father, a Jew and a merciful human being in the modern world.

Howard Jacobson will read from the book, which is set in Cheshire, and discuss it with John McAuliffe in the Historic Reading Room of The John Rylands Library. From 5.30pm, there will be an opportunity to view Shakespeare’s First Folio, and the 1609 edition of the Sonnets, which are on display in the Rylands Gallery.

Howard Jacobson’s has written fourteen novels and five works of non-fiction. He won the Bollinger Everyman Wodehouse award in 2000 for The Mighty Walzer and then again in 2013 for Zoo Time. In 2010 he won the Man Booker Prize for The Finkler Question and was also shortlisted for the prize in 2014 for his most recent novel, J.

This event is part of the Shakespeare 400 celebrations coordinated by King's and Hogarth Shakespeare, a major publishing initiative across the Penguin Random House Group.

PLEASE NOTE: This event is FREE but booking is essential. Please call Box Office on tel: 0161 275 8951 or book via email: boxoffice@manchester.ac.uk to reserve your place.

Tickets are subject to availability and are not guaranteed. Ticket requests may be made via email to the MHC box office; however, these must be made by no later than 4pm Monday 4 April 2016. All confirmed bookings will receive a confirmation email.