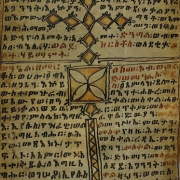 The use of amulets as an aid and support to traversing the trials and tribulations that accompany one in their life-time is common to every age. The so called “Semitic” branch of what we call in academia magic has preoccupied scholars for a good century. Within it we find Jewish, Christian and Muslim and religious varieties that occur in such languages as Hebrew, Greek, Aramaic and Arabic. While the Ethiopian magic scrolls exist in considerable abundance, the particular genre has been rather neglected.

In this seminar Dan will give an introduction to the rich Ethiopian magic scroll literature, that Dr Mersha Alehegna refers to as part of an ‘under-ground literature, as well as to its very own, peculiar form of visual depiction. He will use, in his presentation, some images and examples from the University of Manchester's Special Collections, housed at John Rylands Library, that he is currently researching into as a Visiting Fellow.

Biography: Biography: Dan Levene is a Reader in History at the University of Southampton. Of his publications one might note a couple of volumes on Jewish magical literature from late antiquity: (2013) Jewish Aramaic curse texts from late-antique Mesopotamia, Leiden, NL, Brill (Magical and Religious Literature of Late Antiquity, 2), and (2003) A Corpus of Magic Bowls: Incantation Texts in Jewish Aramaic from Late Antiquity, London, GB, New York, US, Kegan Paul International; Columbia University Press (Kegan Paul Library of Jewish Studies). In the last three years he has drawn his attention to Ethiopian magical texts.