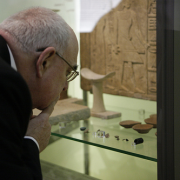 The Manchester Museum has a fascinating collection of Roman objects. Manchester itself was a Roman fort, and the Museum showcases many local Roman finds, as well as material from other parts of the Roman empire. Join a Roman tour of the Manchester Museum, and see objects such as the famous Manchester Word Square, and casts of a woman and a dog from Pompeii, killed by the eruption of Vesuvius. After the tour, there will also be an opportunity to handle some Roman pottery and a selection of Roman coins, in the Collections Study Centre at the Museum.

In association with #BeingRoman from the British Museum