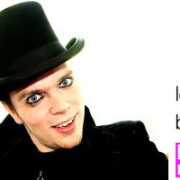 Dominic Berry, Manchester's queer vegan poet, king of the aubergine and author of 'Tomorrow, I Will Go Dancing' (his first collection of poems) is co-host of Freed Up, Manchester's busiest (and friendliest) open mic night for the last four years. Always gigging somewhere, a list of his current performance dates can be seen on his website, http://www.dominicberry.net

Regie Cabico is a poet and spoken word artist and has been featured on HBO’s Def Poetry Jam. Cabico has won top prizes in the 1993, 1994 and 1997 National Poetry Slams in the USA. His poetry appears in over 30 anthologies including Aloud: Voices from the Nuyorican Poets Café, Spoken Word Revolution and Slam. He was also featured in MTV's "Free Your Mind" Spoken Word Tour. Regie is the recipient of three New York Foundation for the Arts Fellowships for Poetry and Multi-Discplinary Performance. He is the artistic director of Sol & Soul, an arts and activist organization.

Black Cracker (NYC). “One of the twelve most fascinating NYC poets” according to UNTOLD magazine and just back from touring poetry in India and Europe with jazz trio Grandpianoramax, Black Cracker’s resume is as crazy as his spacey, electro-flavored beats. Not your average Hip Hop producer, Black Cracker is a one-time army brat, art-school dropout, and published poet. He cut his teeth with sisterly avant-pop duo CocoRosie, for whom he produced tracks, DJed, and even provided a little beatboxing. Self-taught and operating out of a grimy basement studio, these days he’s assembling beats for Bunny Rabbit and the Cult of Miracles (with MC Bunny Rabbit), Single White Female (with MC K~Swift of Zulu Nation), and Light Asylum (with Shannon Funchess of !!!). He has been featured in VIBE, The New Yorker and, Dazed and Confused amongst others. As a poet he has been featured in numerous documentaries most recently Spitting Ink which just premiered in the IDFA with a nomination for "Best First Appearance". Black Cracker has been published in Spokenword Revolution, Bullets and Butterflies, and his own manuscript will be published this spring by the Bowery Poetry Club Press.

Gerry Potter has emerged as a poet and performer under his own name after many successful years touring the world as his legendary alter ego, Chloe Poems. Following several successful books as Chloe, Gerry has just released his first collection of verse as himself, entitled 'Planet Young', currently available from Flapjack Press.

Jackie Hagan is a Manchester-based performance poet, originally from Skem. Awarded Best Emerging Poet 2006 by The Poetry Kit, The Wisdom of the Jumble Sale (Flapjack Press, 2009), is Jackie’s second poetry collection, following Shut Your Eyes and Put Out Your Hand (Citizen32, 2007). She has also edited several poetry anthologies and guest edited Citizen32 magazine. She facilitates creative writing sessions for adults with mental health needs and performs poetry round the UK. Her play, Help, has been performed at Contact and Mark Thomas once called her a genius (although this has nothing to do with poetry and more to do with her suggestion that all bailiffs should be middle class).

Fergus Evans is a boy kissin' ‘activist-in-training', and a founding member of No More Productions/ Twinhead Theatre, one of Atlanta's premiere live art collectives. Following study for his MA in Gender, Sexuality and Culture at the University of Manchester, he has returned to writing and performing, completing a residency at Contact, participating in Apples & Snakes 'Incubate' and launching his 'Sticks & Stones' poetry zine, a work surrounding bullies & bullying.

Presented in association with Apples & Snakes.