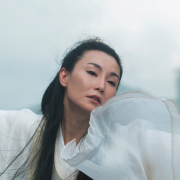 Ten Thousand Waves is the most recent in a series of major moving image acquisitions by the Whitworth and was supported through Art Fund’s Moving Image Fund.

Rooted in the Morecambe Bay tragedy of 2004, in which 23 Chinese cockle-pickers drowned off the coast in northwest England, this cinematic three screen installation explores contemporary experiences of desire, loss and separation. Julien interweaves news footage of the rescue mission with the legend of Mazu the Sea Goddess, protector of seafarers, alongside scenes of the Guangxi province in southern China where the cockle-pickers’ spirits journey back to the 'Middle Kingdom', and the rapidly transforming city of Shanghai.

The film’s score fuses Western and Eastern styles, incorporating music and original score by Jah Wobble and the Chinese Dub Orchestra as well as by the classical composer Maria de Alvear.