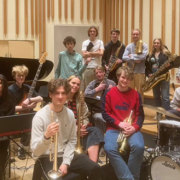 The Music Department’s jazz ensemble takes the form of a little big band (a smaller version of the conventional 18-piece big band). The ensemble was established in October 2019 and, alongside the Klezmer and Gamelan groups, the Little Big Band is one of the department’s many assessed ensembles that complement the larger orchestras operating under the umbrella of Manchester University Music Society (MUMS). The band made its public debut at Manchester’s iconic venue, Band on the Wall, in December 2019.

The musicians are second- and third-year Music students, most of which play a range of instruments. The main focus of the group is on the interaction between jazz and music from Latin America of mainly African ancestry, what is broadly understood as Afro-Latin Jazz.

This programme features arrangements of popular songs from the 20th century in contemporary Afro-Latin settings, as well as number of popular compositions by the legendary rhythm and blues group, Tower of Power.