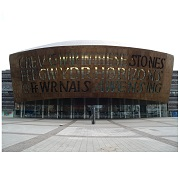 In this talk Rob Ford and Nerys Evans discuss the recent history of the Welsh Assembly to date and the forthcoming Assembly elections in May. Both speakers will examine the significance of the elections within the wider context of UK politics. Particular emphasis will be given to the impact of securing gender balance within the Assembly. The talk will also outline how the PR electoral system has resulted in minority government and coalitions since the advent of the Assembly and how it will likely result in the growth of UKIP’s electoral representation in May. Finally the speakers will reflect on the issues that are likely to dominate the campaign, specifically the EU referendum and the extent to which this will reduce voters to national issues in deciding how to vote and the implications for the make-up of the next Welsh Government. Nerys is Director of Policy for Plaid Cymru, a former Assembly Member in the National Assembly for Wales, and UoM Politics Alumni. She will also share her experiences of using her Manchester Politics degree to pursue her career in campaigning and policy, with some tips for students wanting to explore careers in these fields. Rob is Senuior Lecturer ijn politics at The University of manchester and co-author of the best sellong books 'Revolt on the Right' and 'Sex, Lies and the Ballot Box'.

The Pankhurst Politics Seminars are research talks aimed at a student audience, in which members of staff in Politics talk about their own recent research, followed by questions and discussion with the audience. Emmeline Pankhurst was born in Moss Side, Manchester, in 1858, and was a political activist and leader of the British suffragette movement. The New York Herald Tribune called her "the most remarkable political and social agitator of the early part of the twentieth century and the supreme protagonist of the campaign for the electoral enfranchisement of women." Her daughters Christabel, Adela and Sylvia were also well-known activists. This series of seminars honours Manchester’s radical political history.