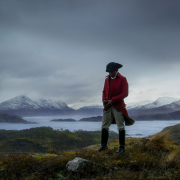 Artist John Akomfrah with be in conversation with Maria Balshaw, Director, the Whitworth and Manchester City Galleries.

This event accompanies the exhibition of his acclaimed video installation Vertigo Sea which will be at the Whitworth from 24 March – 28 August 2017.

John Akomfrah is an artist and filmmaker whose works are characterised by their investigations into personal and collective histories and memory, cultural, ethnic and personal identity, post-colonialism and temporality. Importantly, his focus is most often on giving voice to the experience of the African diaspora in Europe and the USA.

A founding member of the influential Black Audio Film Collective, his work has been shown in museums and exhibitions around the world including the Liverpool Biennial; Documenta 11, Centre Pompidou, the Serpentine Gallery; Tate; and Southbank Centre, and MoMA, New York. A major retrospective of Akomfrah's gallery-based work with the Black Audio Film Collective premiered at FACT, Liverpool and Arnolfini, Bristol in 2007. His films have been included in international film festivals such as Cannes, Toronto, Sundance, amongst others.

John Akomfrah has been chosen from a shortlist of 6 of the world's most important artists to win the UK’s leading prize for international contemporary art, Artes Mundi 7

This event is ticketed on Eventbrite.

Book your place now by following the link below: https://www.eventbrite.co.uk/e/in-conversation-john-akomfrah-tickets-32346688817