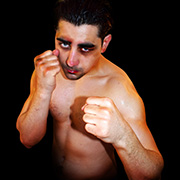 Can two men raised to fight ever learn to love? “There are only three things that need to be accomplished before the devil comes home: one of them is homosexuality being legal” Tyson Fury, World Heavyweight Champion, 2015

Undefeated bare-knuckle fighter ‘Gorgeous’ George O’Connell leaves his traveller roots behind to embark on a career as a professional boxer under the tutelage of legendary trainer Vic Samson. Through a developing relationship with Vic’s openly gay son and fellow boxer Dane, George begins to learn more about himself than he ever had done before. But when the time comes to fully embrace this newfound identity, can George be true to himself?

‘Gypsy Queen’ is the story of two men who find themselves, and each other, in the most unlikely of worlds and asks what they are willing to do when the fight moves outside of the ring. A play about the influence of our roots, the satisfaction of our desires and the formulation of our identity.

Gypsy Queen began life as Champion, a short play as part of ‘To Russia With Love’ organised by several LGBT theatre makers in Manchester in February 2014 (an event protesting the staging of the Winter Olympics in Sochi, Russia and with funds raised donated to a Russian LGBT organization).

Rob decided to extend the play following comments made about the LGBT community by boxers Tyson Fury and Manny Pacquaio over the past 6 months.