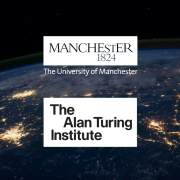 The Digital Futures team are hosting talks by The University of Manchester's new Turing Fellows for 2021-22.

Richard's research interests are in the field of data science and in particular in the development and application of optimization, learning and analytics techniques to real-world problems arising in areas such as healthcare, manufacturing, economics, sports, music, and forensics. Much of his research has been funded by grants from Innovate UK, the Engineering and Physical Sciences Research Council (EPSRC), and industrial partners.

Evaluating candidate solutions by conducting an experiment, e.g. a physical, biological or chemical experiment, can be expensive, time-consuming and/or resource intense. Drug development, instrument setup optimization, and robotics are prime examples where optimization relies on experiments. This talk will introduce several non-standard challenges arising due to experiments --- such as non-homogeneous per-objective evaluation times in a multi-objective problem, dynamic resource constraints, non-static drug libraries, and problems with safety concerns ---, touch on existing techniques to cope with these challenges, and discuss promising areas of future work.

There are many challenges and opportunities, such as internet of things, big data, machine learning, smart grid etc in the area of network-connected systems and control applications, in particular, in the areas relating to distributed learning, optimisation, decision making and control. Recent advances in distributed networks along with the development of complex and large-scale subsystems have significantly incentivised coordination and cooperation over multi-agent systems. Many distributed algorithms have been developed in the areas relating to distributed machine learning, optimisation and decision making, which aim at making decisions in local level, and achieving certain global objectives through network communications. Certain control perspectives such as convergence, nonlinearity, adaptation and consensus are clearly essential in the design and analysis of the distributed algorithms. This talk will cover some recent activities in relation to multi-agent applications carried out in the speaker’s group in University of Manchester, including machine learning via network consensus, distributed optimization using algorithms based on multi-agents, applications of distributed optimization and machine learning algorithms to power systems and smart girds such as optimal power dispatch etc. The speaker will review some fundamental concepts of network-connected dynamic systems and basic analytic tools for consensus-based distributed algorithms, and the presentation will focus on distributed algorithms, and motivations to the algorithm design from control perspectives.