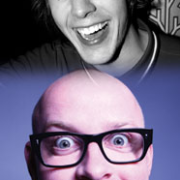 Catch these comedians on their way up (to Edinburgh)

Stand-up comedian, and the current face of CBBC, Iain Stirling has been dubbed one of Scotland's "hottest newcomers" by The Scotsman and was second place runner-up in both the Paramount Funniest Student Final and Chortle Student Comedian of the Year (2009), proving he's more than capable of keeping adults entertained as well as kids.

Dan Nightingale, one time regular warm up for Jonathan Ross, can't settle on one concept, so instead brings us "The 11 & a 1/2 ill-conceived Edinburgh Shows of Dan Nightingale".

"Could be unstoppable" - The independent.