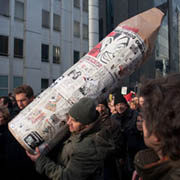 A round-table to contextualise the recent Paris killings and their consequences.

Guest speaker: Olivier Cyran (Paris-based free-lance journalist; former collaborator with Charlie-Hebdo, 1991-2001). PLEASE NOTE: O. Cyran left Charlie-Hebdo in 2001 in disagreement with its editorial line, which he considered as prejudiced against French Muslims. He will discuss the fraught place of secularism in French journalism.

Download an event poster for Are we Charlie?: http://documents.manchester.ac.uk/display.aspx?DocID=23439