Professor Munasinghe to speak at Prince of Wales summit 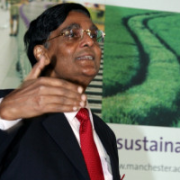 One of the world’s leading thinkers on climate change is to speak at the North West part of the Prince’s of Wales’ May Day Summit on Climate Change.

Professor Mohan Munasinghe, who is Director General of The University of Manchester’s Sustainable Consumption Institute (SCI) will argue at the Manchester Airport event that tackling climate change is more important than ever in the economic downturn.

Professor Munasinghe is also co-winner of the 2007 Nobel Prize for Peace, as Vice Chair of the UN Intergovernmental Panel on Climate Change.

The event is part of a national day of linked events taking place across the UK, convened by Business in the Community. The main hub event is in London.

The third Prince’s May Day Summit will take place at events across the UK and will be the largest ever gathering of companies committed to taking positive action on climate change.

It has been convened by one the Prince of Wale’s charities, Business in the Community, as part of the May Day Network. Leading businesses from across the North West will be represented at the event.

The North West May Day summit will be held in the Concorde Hangar at Manchester Airport, chosen, say the organisers, to reflect on some of the key challenges of climate change.

A speech by the Prince of Wales will be streamed live from the hub event in London.

SCI is funded by Tesco with a £25 million investment over five years.