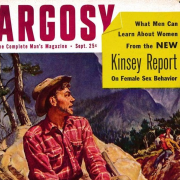 Half a century ago Richard Hofstadter published his influential essay ‘The Paranoid Style in American Politics,’ in which he identified ‘heated exaggeration, suspiciousness and conspiratorial fantasy’ as a recurrent feature of the nation’s political life. Hofstadter’s thesis has in subsequent decades been at the centre of a rich and interdisciplinary scholarly discourse that has been attentive to the cultural politics of the Cold War period as read especially through the lens of gender, but also those of science and technology, mass media, and corporate capitalism, amongst others.

In our current political moment Hofstadter’s call for critical reflection on the genesis, mechanisms and consequences of the paranoid style beckons with renewed urgency. The aim of this conference is to generate such reflection by engaging with and showcasing a rare research resource recently acquired by the University of Manchester’s John Rylands Library: The Argosy Magazine. Founded in the 1880s as a youth magazine in the 1880s and switching to an adult fiction formula at the turn of the century, The Argosy was relaunched in 1946 as ‘The Complete Man’s Magazine.’

Forged from an eclectic mix of rugged frontier individuality and outdoor virility, anxiety about the supposedly emasculating threats of suburban domesticity and white-collar managerialism, a desperation to fulfil the norms of consumerist well-being projected by corporate advertising, and a paranoia about lurking external and internal threats to American liberties, The Argosy serves as a largely untapped archive for probing the volatile mood of postwar cultural politics that prompted Hofstadter’s essay. This conference aims to both raise awareness of this collection for individual researchers and to foster cross-disciplinary and cross-institutional networks to re-examine the varied cultural landscape of American ‘paranoid style.’

1.30-2.00: Ian Burney (University of Manchester), The Argosy comes to Manchester

Martin Halliwell (University of Leicester), Paranoia and the Therapeutic Revolution

Andrew McKenzie-McHarg (Cambridge), Psychologizing History: The Emergence and Reception of The Paranoid Style