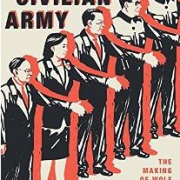 Please join the Manchester China Institute for a book launch of Peter Martin’s China’s Civilian Army: The Making of Wolf Warrior Diplomacy. In the book, Martin charts China's transformation from an isolated and impoverished Communist state to a global superpower from the perspective of those on the front lines – China’s diplomats.

Drawing for the first time on the memoirs of more than a hundred retired diplomats as well as from Martin's first-hand reporting as a journalist in Beijing, this groundbreaking book blends history with current events to tease out enduring lessons and paint in vivid detail the kind of power China is set to become.

Biography: Peter Martin is a political reporter for Bloomberg News. He has written extensively on escalating tensions in the US-China relationship and reported from China’s border with North Korea and its far-western region of Xinjiang. He previously worked for the consultancy APCO Worldwide in Beijing, New Delhi, and Washington, where he analyzed politics for multinational companies. In Washington, he served as chief of staff to the company’s global CEO. His writing has been published by outlets including Foreign Affairs, the National Interest, the Guardian, the Jamestown China Brief, the Diplomat and the Christian Science Monitor. He holds degrees from the University of Oxford, Peking University and the London School of Economics.