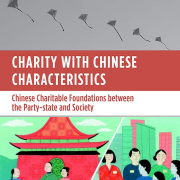 Webinar: Why do Chinese set up charitable foundations? How do Chinese foundations operate in the People's Republic of China? Which role can and do they play in the authoritarian system? What is the legal and political framework in which they operate? And how do they cope with it?

Katja and Knut Benjamin have conducted extensive fieldwork and document analysis to answer these and other questions about charitable foundations in China. On the occasion of the publication of their book "Charity with Chinese Characteristics: Chinese Charitable Foundations between Party-state and Society", the two authors will share their insights on one important actor in China's charity sector.

Biography: Katja Levy joined MCI in September 2020 as the Kui Man Gerry Yeung Postdoctoral Fellow. Before that, she was a professor and lecturer at Freie Universität Berlin, Technische Universität Berlin and the University of Würzburg in Germany. She is a political scientist and currently studies charity and civic engagement in the UK and China.