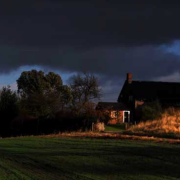 The Digital Futures team are hosting a series of online talks by The University of Manchester's new Turing Fellows for 2021-22.

For the final event in this series, new Turing Fellow Christopher Conselice is joined by Turing AI Fellow Anna Scaife.

Christopher's research is focused on galaxy formation and evolution through cosmic time. He works with space and ground-based data and computer simulations to determine how galaxies have formed from the earliest epochs in the universe until today. He has led several large HST surveys including the GOODS NICMOS Survey (GNS) and is a founding member of other large surveys including CANDELS and GOODS.

Recently the application of machine learning, especially deep learning, to astronomy and astrophysics has become very popular. Open use of large data sets in astronomy makes it ideal for applications of machine learning, yet many of the tools, procedures, and adaptability are still in their early stages. I will present some of our work on these topics including using supervised, unsupervised, and regression analyses for determining galaxy properties and evolution. I will also discuss upcoming astronomy missions which will contain hundreds of millions of galaxies, stars, quasars, defects and other detected objects that can only be classified and studied using machine learning techniques that are in the process of being developed.

Anna’s Turing AI Fellowship focuses on AI for discovery in data intensive astrophysics. In this era of big data astrophysics, the use of machine learning to extract scientific information is essential to successfully utilise facilities such as the Square Kilometre Array (SKA) telescopes. These telescopes have data rates so large that the raw data cannot be stored and even using the compressed data products will require a super-computer.

The expected volume of data from the new generation of scientific facilities such as the Square Kilometre Array (SKA) radio telescope has motivated the expanded use of semi-automatic and automatic machine learning algorithms for scientific discovery in astronomy. In this field, the robust and systematic use of machine learning faces a number of specific challenges including a paucity of labelled data for training (paradoxically, although we have too much data, we don't have enough), a clear understanding of the effect of biases introduced due to observational and intrinsic astrophysical selection effects in the training data, and motivating a quantitative statistical representation of outcomes from decisive AI applications. In this seminar I will talk specifically about the challenge of recovering well-calibrated uncertainties from Bayesian neural networks when classifying radio galaxies, a canonical example of a radio astronomy AI application. I will discuss how both model and likelihood misspecification can affect this calibration, how these effects potentially contribute to the cold posterior effect seen when building models using real astronomical data and what steps we can take to address these problems.