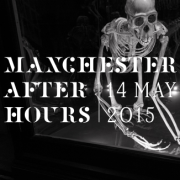 Thurs 14 May, 6-9pm. Brighter Sound brings together musicians Jason Singh and Giuliano Modarelli in an event inspired by India’s Warli artists and the animation of the Museum’s collections.

A Fine Line has worked in partnership with Brighter Sound to explore the potential of artists' interdisciplinary collaborations with Traditional Indian arts practise.

Jason Singh – a composer and sound artist and Giuliano Modarelli a virtuosic guitarist, spent an exhilarating three weeks working in the context of Warli painters who are themselves exploring and experimenting beyond the boarders of tradition.

Against a backdrop of Warli canvasses and images, Jason and Giuliano will perform an aural account of their journey.

Bad Language Live Literature Tour will also be calling in at the Museum 6.6.30pm. Linking Manchester After Hours together is one thing: live literature supremos Bad Language lead a one-off live storytelling tour with six stories at three special locations tonight. Choose one writer or one venue, or process through the city to hear all six standalone tales interweave throughout the night. Writers include Dean Gaffney and Carys Davies. 6-6.30pm: Manchester Museum 6.45-7.15pm: Central Library 8-8.30pm: Museum of Science and Industry

Part of Museums at Night. One Night. City Wide. Free Events. On Thursday 14 May it’s nocturnal shenanigans with Manchester After Hours. This year’s mix of odd couplings and musical mayhem takes in the places and spaces you don’t often get to after dark, when museums, galleries and libraries join together for a one-night, city-wide social.