The Adhesion of Love 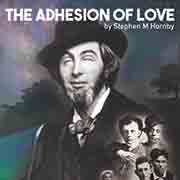 In 1885, John W Wallace, a working-class man from Bolton, sets up the Eagle Street ‘College’, a book group that celebrates his love for Walt Whitman’s poetry. Attracting a small group of like-minded men, Wallace embarks on a journey of spiritual and sexual self-discovery through Whitman’s words.

When Wallace arrives in America six years later and meets his literary hero face-to-face, he is forced to confront the true nature of the intimacy the college members are seeking. On his return to Bolton, Wallace is unsure how to express his new sexual and spiritual awakening within in the conservative confines of Victorian England.

Written by multi-award winning playwright Stephen M Hornby, The Adhesion of Love tells the extraordinary true story of how an architect’s assistant from Bolton crossed the Atlantic in 1891 to meet the visionary queer poet Walt Whitman.

Stephen’s last play, The Burnley Bugger’s Ball, gained 5 star reviews and he was awarded the 2018 WINGS by the Swedish International Lesbian & Gay Culture Network for his short film Unchechen.