Lovell Lecture: The Lovell Telescope at 60 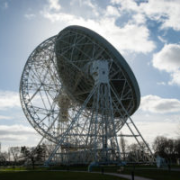 Join professors Tim O’Brien and Simon Garrington in this anniversary special celebrating 60 years of the Lovell Telescope at Jodrell Bank.

Standing tall on the Cheshire landscape since 1957, the giant Lovell Telescope at Jodrell Bank has become a familiar and even comforting sight for many of us, often signalling a sense of ‘home’. The telescope has also become an internationally renowned landmark in the world of astronomy and is widely considered to be an icon for British science and engineering.

In this, its anniversary year, Professor’s Tim O’Brien and Simon Garrington , both Associate Directors of the Jodrell Bank Observatory, will explore the Telescope’s history since it’s ‘first light’ in 1957, its world-leading and ground-breaking discoveries, and its significance as a part of our national and cultural identity.