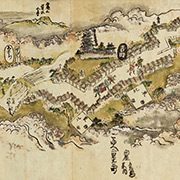 We are excited to welcome Professor Peter Kornicki, who will talk about the production of maps in Japan during the Edo period and their appearance in European collections, such as the one assembled by the 25th Earl of Crawford in the 1860s and 1870s and purchased by The John Rylands Library in 1901.

Professor Kornicki produced a catalogue of our Japanese collection which was published in the Bulletin of The John Rylands Library in 1993, and his return to the University marks the launch of our latest digitisation project.

In partnership with the School of Arts Languages and Cultures, the Japan Foundation and the Sasakawa Foundation, The University of Manchester Library has recently digitised a number of maps from our Japanese Collection.

Professor Kornicki is well-known for his work on the history of the book in Japan. He has published catalogues of early Japanese books held in several libraries, and also launched the Union Catalogue of Early Japanese Books in Europe, which is now available online. Among his numerous publications are the important monograph; The Book in Japan: A Cultural History from the Beginnings to the Nineteenth Century (1998), and, more recently; The History of the Book in East Asia (2013), co-edited with Cynthia Brokaw.