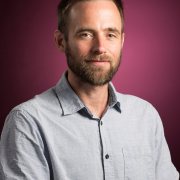 MeerKAT is a new South African radio telescope situated in the arid Karoo region of the Northern Cape province. Inaugurated in July of 2018, it is a connected network of 64 dishes, each 13.5 metres in diameter, and is presently the most powerful telescope of its kind in the world.

In this lecture, Dr Ian Heywood will present an overview of this machine and some of the results that it has produced, including some spectacular observations of the centre of the Milky Way.

Dr Ian Heywood received his PhD from the University of Manchester in 2005, where he used the MERLIN telescope to study the radio emission from explosions around binary stars. Following this he held post-doctoral positions at the University of Oxford, where he worked on imaging the radio jets from active galaxies, as well as simulations for the design of the Square Kilometre Array, and software development for the ALMA telescope. He moved to Australia in 2013 to work on the commissioning of the new ASKAP radio survey telescope, where he was later head of the astrophysics group at CSIRO’s Astronomy and Space Science division. He returned to the University of Oxford in 2017, where he now works mainly on delivering some large survey projects using the MeerKAT telescope. He has worked on a range of astrophysical topics, but his research has always revolved around the use of radio interferometry. He spends a large fraction of his time developing new ways to reliably process the huge volumes of data that modern radio array produce. He is very excited to be returning to Jodrell Bank where he was taught this technique for the first time.

Food and Drink: The Planet Café will be open before the lecture serving snacks and drinks from 6.30pm.