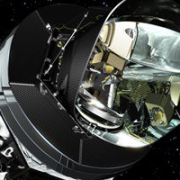 Cutting-edge engineering by staff at the Jodrell Bank Centre for Astrophysics will play a crucial role in a European space mission – due to blast off on Thursday 14 May – to study the fading glow of the Big Bang.

Staff at The University of Manchester facility have designed and built radio receivers at the heart of one of the major instruments on board the Planck satellite – the most sensitive receivers of their type ever built.

The European Space Agency’s Herschel and Planck satellites will be launched into space from French Guiana, where they will collect the most detailed information yet about the birth and evolution of our Universe and its stars and galaxies.

The UK is playing major roles in both projects, with funding from the Science and Technology Facilities Council (STFC).

Planck will study the ripples in the cosmic microwave background radiation which led to the formation of the first stars and galaxies, looking back in time almost 14 billion years to the origin of the universe.

The satellite will make very sensitive measurements of the temperature over the whole sky, at nine different frequencies between 30 and 900 GHz, covered by two main instruments called High and Low Frequency Instruments (HFI and LFI).

Staff at The Jodrell Bank Centre for Astrophysics have played a crucial role in the development and construction of this technology – and will continue to play a leading role in the analysis of the scientific data which Planck will produce over the coming years.

Jodrell Bank is involved with the two lowest frequencies of the Low Frequency Instrument (LFI) on Planck. So-called ‘cryogenic low noise amplifiers’ have been developed at Jodrell Bank, with help from the University of Birmingham and The Rutherford Appleton Laboratory.

Other Jodrell Bank scientists are involved in the High Frequency Instrument (HFI). First at Cardiff University and now at the University of Manchester, they have played a major role in the design, development and calibration of the Focal Plane Unit, in particular the cold optics, in collaboration with the Institut d'Astrophysique Spatiale in France, Maynooth University in Ireland and JPL/Caltech in the United States.

Planck will observe the whole sky at least twice at all nine frequencies over two separate six month periods, and after about 18 months in orbit the data will be combined into maps of the microwave sky at various data processing centres situated around Europe.

Extraction of the key data from the maps will be the task of the Planck Consortium members, including the Jodrell Bank team.

By around 2011 or 2012 it should be apparent whether scientists’ current understanding of the origin and evolution of our Universe is correct, with the mission expected to pose many more questions for post-Planck generations of spacecraft to answer.

Researchers at Jodrell Bank will also use the Herschel satellite, which will be launched on the same rocket as Planck. Its 3.5m mirror, the largest single mirror ever built for a space telescope, will collect long-wavelength radiation from some of the coldest and most distant objects in the Universe.

Dr Richard Davis from the Jodrell Bank Centre for Astrophysics at The University of Manchester and UK LFI Principal Investigator said: "This is a very exciting time and we can't wait to see the cosmic sky with the unprecedented resolution and sensitivity provided by the Planck satellite. It will tell us about how the universe evolved from the Big Bang into the beautiful galaxy structures we see around us today.

“The launch is a culmination of 13 years hard work on the Low Frequency Instrument, which has seen us construct receivers with the highest sensitivities achieved in these bands. This is essential to give us the clear view of the Cosmos expected from Planck.

“The project has involved us in the construction of space qualified hardware, which has been a new exciting venture for our team of engineers, technicians, academics and students at Jodrell Bank. We are privileged to be a part of this major international project.”

A special party will be held at The University of Manchester at 1.45pm on Thursday 14 May to mark the event. The launch will be screened live. Media are able to attend by prior arrangement