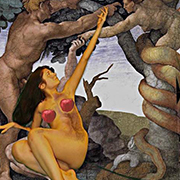 A work of ART by DEAD PIG (UK)

‘The next day another turn came, and so it continued always the same...’

An image-based performance - a living breathing art work - trapped for eternity between process and product, exploring the vacant concept of originality.

DEAD PIG is a four piece visual art and performance company formed on the Contemporary Theatre and Performance degree programme at Manchester Metropolitan University. They are interested in how the spectacle of visual art and performative can be provocative in relation to a number of taboo topics. DEAD PIG’s work has a distinctive image-based/pictorial style which works with gradual progression and repetition, and occupies a limenal space between art and theatre.

A solo performance delivering three different stories about ‘us and them’, about chemical reactions that happen in the body, about pigmentation defining your worth, about having the right type of blood...

Civilisation explores the world we live in, the people we pass everyday, the stories we hear on the news, and us as human beings.

Emma Gannon is a live artist originally from London but currently finishing her Theatre degree at the University of Chichester, and hoping to continue on to an MA at Chichester in September 2017. She creates work focused around similarity and difference and why we use these differences as a weapon against each other. Moving between site-specific work, installation and text she uses the mode of delivery to challenge the audience about the facts about our bodies and how we are where we are today.