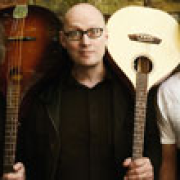 Adrian Edmondson and The Bad Shepherds play punk songs on folk instruments. Not as a gag, but because they really like the noise. They think the songs are better than people remember. They love folk instruments. It works. They do songs by The Sex Pistols, The Clash, The Stranglers, The Jam, Sham 69, The Undertones, The Ramones, The Buzzcocks, The Specials, Talking Heads, Squeeze and others, even Kraftwerk! Alright, they're not all punk, but they come from roughly the same era. They've mostly given the songs a kind of Celtic feel, and they've stuck in the odd reel and jig here and there. But occassionally they just thrash! They've always thought the excitement of a reel taking off is the nearest thing to the excitement of watching punk live in the 70's.

ADRIAN EDMONDSON (Vocals, ‘thrash mandolin’) Ade is best known as a comedian in The Young Ones, Bottom, and The Comic Strip Presents. Though he’s no stranger to the music world having played the Monsters of Rock and Reading Festivals with Bad News, the Hootenanny with Jools Holland, Hyde Park with The Who, and he’s toured with The Bonzo Dog Doo-dah Band. He’s also had a No 1 single with Cliff Richard! And as a director he made lots of music videos in the 80’s for the likes of The Pogues, Squeeze, Elvis Costello and 10,000 Maniacs.

TROY DONOCKLEY (Uillean pipes, cittern, whistles, vocals) Troy has built up a formidable reputation as both a Composer/Arranger/ Musician/Performer and as a leading virtuoso of the Uilleann Pipes. He’s released three critically acclaimed solo albums, is a member of Iona, and also finds time to record and tour with the likes of Maddy Prior (he has co-produced four albums), Barbara Dickson (produced two albums) Maire Brennan (Clannad), Midge Ure, Nightwish, Lesley Garrett , Roy Harper, Status Quo, Alan Stivell, Del Amitri and many more…