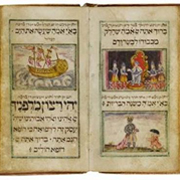 The John Ryland Research Institute is pleased to announce an event being hosted by the Manchester Jewish Museum. The Museum welcomes Professor Emile Schrijver to present on 15 January 2015.

It is generally believed that Judaism is at odds with visual art. The history of the Jewish book, however, shows the contrary. There is a rich artistic tradition both in medieval manuscripts and in Jewish books since the fifteenth-century invention of printing. Prof. Emile Schrijver's talk will discuss many examples from this tradition, ranging from the late fifteenth until the late nineteenth centuries. He will also discuss the lives and work of the artists responsible, many of them Jewish, some of them not. His talk will be accompanied by often unpublished images of illustrated books from public and private collections all over the world.

Prof. dr. Emile G.L. Schrijver (1962) is Professor of Jewish Book History and curator of the Bibliotheca Rosenthaliana (Special Collections) at the University of Amsterdam. He is also one of the curators of the private Braginsky Collection of Hebrew Manuscripts and Printed Books in Zurich, Switzerland. Schrijver is an expert of Hebrew manuscripts, in particular of the post?medieval period, and of Jewish printing on both of which he has published and lectured extensively in Europe, Israel and North America. He has written a number of introductions to facsimile editions of Hebrew manuscripts and has published numerous auction and exhibition catalogues. Schrijver is the executive editor of an Encyclopaedia of Jewish Book Culture, which is scheduled to be published by Brill Publishers of Leiden and Boston, as well as the editor-in-chief of the annual Studia Rosenthaliana, published by Peeters Publishers of Louvain, Belgium. Schrijver serves on boards and advisory committees of numerous Jewish cultural organizations in- and outside the Netherlands.