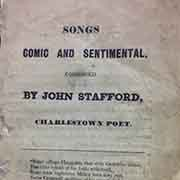 Presented by Jennifer Reid and Mike Sanders, this event focuses on two working-class poets, John Stafford and Joseph Chapman, who were active radicals and poets in Ashton-under-Lyne in the first half of the Nineteenth Century.

Unusually for working-class poets of this period, both published a volume of poetry and these books form part of the collection at the Tameside Local Studies and Archive Centre. John Stafford (the ‘Charlestown poet’) was a veteran radical who attended Peterloo. Despite being illiterate, he composed a number of songs in support of various radical movements from Luddism through to Chartism. Joseph Chapman, worked as a calico weaver and, as a young man, was an active Chartist during the tumultuous year of 1848.

This event, which features both word and song, will consider what the poems and songs tell us about the ways in which working-class people understood the enormous changes which were happening in Ashton as a result of industrialisation. It will also look at the ways in which songs and poems were used by local radicals to create, celebrate, and commemorate Ashton’s proud radical heritage.

For any queries, please email: creative@manchester.ac.uk