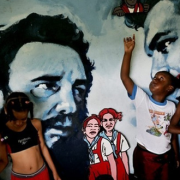 Might one way for things to be permanent be that they are taken for granted? Might the temporal question of permanence entail also the logical question of what can be taken as given? In this paper I want to explore this question with reference to revolutionary politics in Cuba, and particularly the way in which ‘the revolution’ has achieved the status of an encompassing ‘condition’ or ‘premise’ for people’s lives on the island. In terms of Wagner’s distinction between the innate and the artificial, revolution may well appear as the apogee of the latter – this being the classic image of revolution as human beings taking the reins of their own destiny, making the future through their actions, building a better world for themselves, and so on. But how then does the artifice of such a human ‘project’ (which is how Cuban official discourse still refers to ‘la revolucion’: ‘un proyecto nacional’) get ‘implicated’, such that it begins to feature more as a ‘given’ in people’s everyday lives? Exploring the material conditions under which this state of ‘givenness’ may be achieved, I develop this argument also with reference to Bourdieu’s notion of habitus, as well as Marx’s treatment of the Hegelian idea of ‘second nature’.