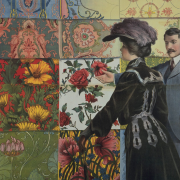 Unreformed: Wallpaper and Design Diversity In the middle of the nineteenth century wallpaper design suddenly became diverse. English manufacturers began to excel at the quick production of affordable wallpapers. There was also an ever-increasing availability of things from abroad. This resulted in a dramatic explosion of choice.

Design Reform was a movement that wanted to control the quality of English design. There was enough concern about the higher standard of foreign things that the debate made its way to Parliament.

This exhibition looks at how powerful the voices of the people who called for Design Reform were. These (mostly male) designers, writers and MPs had a lasting effect on the way museums and art schools taught about good design.

Ultimately the exhibition is a celebration of their failure to control the diversity of design that was available. The Victorian wallpapers in the Whitworth’s collection represent the full range of ‘good’ and ‘bad’ taste. These will be exhibited alongside a glimpse of the wide variety of patterns available from British manufacturers today.