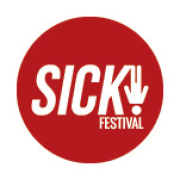 Inspired by the self-aggrandising of boxers at the pre-fight weigh in, Slap Talk is a verbal sparring match that is both a linguistic version of the fight itself and a reflection upon the violence present in everyday language.

Speaking to each other and to the audience via a live feed from a camera to a monitor, the performers rant, insult and threaten each other in a scripted version of a pre-fight press conference crossed with a 24 hour rolling news channel.

Over 6 hours, an autocue scrolls a continuous barrage of passive aggressive violence of lovers talking, the hard sell of a shopping channel, the anger of the fire and brimstone preacher, the subtle violence of middle class one-upmanship.

Action Hero is the collaboration between UK artists Gemma Paintin and James Stenhouse. They make live art and performance that seeks to use audiences as collaborators and co-conspirators. Whilst exploring the epic, they create performance that is intimate, distinctive and invigorating.

Action Hero have toured to theatres, festivals, bars and public spaces from an old cinema in Bangkok to Shanghai Grand Theatre to a Satan’s Riders Motorcycle club house in Tasmania and a blues bar in Texas on the same stage as James Brown. They have been shortlisted for several awards and won an Austin (Texas) Critic’s Table Award in 2013.

‘ultimate discursive arena, interrogating the construction and application of dialogue and performance…intimate, engaging and unsettling work’ This is Tomorrow

‘see why this maverick company, with its engaging DIY aesthetic, is attracting so much attention’ The Guardian

This is a six hour long performance. Audiences are encouraged to stay for as long as they can but welcome to take breaks whenever they like.