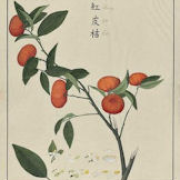 At a time when the world was opening up to trade and exploration, on the lookout for valuable commodities, in particular plants — not least tea, the highly prized crop that originated in south-west China, John Bradby Blake (1745-1773) was a trader working for an East India Company in Canton, also known as Guangzhou. A botanical enthusiast, he undertook the ambitious and innovative task of producing an illustrated catalogue of Chinese plants, a legacy of documents and botanical art, which include Chinese native plants that changed Western food culture and that are now part of our daily lives.

Learn more about the botanical interactions between Britain and China in the 18th century in this talk which will focus on the main aspects of Blake’s project, its reception in Britain and what it reveals of the importance of botany in the contemporary British Empire. Expert in Sino-British exchanges and China Trade paintings Dr. Josepha Richard will provide a snapshot of a period when westerners were just beginning to gain access to that country’s extraordinary food and garden culture.