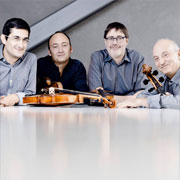 The six-movement Sixth Quartet marks the summit of Weinberg’s first flowering as a chamber-music composer. Appearing in 1946, it was blacklisted two years later in the Anti-formalist campaign, and not performed until the Danels’ sensational premiere in the Cosmo Rodewald Hall in January 2007. Here it is prefaced by two short pieces composed in Tashkent during his second wartime evacuation.