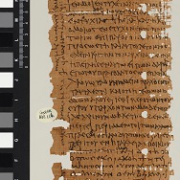 Professor Alan Bowman Vice-President (Humanities) of the British Academy will deliver this public lecture. Professor Bowman's research interests include: Greek and Latin Papyri from Egypt under the Ptolemies and the Romans, the Greek and bilingual Inscriptions of Ptolemaic Egypt, the Vindolanda Writing-tablets, The Roman Economy, the use of computers and information technology for imaging and deciphering ancient documents.

To book a place at this public lecture, visit the EventBrite website - http://bit.ly/2lrrg9V.

Biography: Alan Bowman was born in Manchester, 1944. He was educated at Manchester Grammar School (1955-62), The Queen’s College Oxford (Literae Humaniores 1962-6), and the University of Toronto (Ph.D 1969). He was Assistant Professor of Classics at Rutgers University, New Jersey (1970-2), Lecturer in Ancient History, University of Manchester (1972-7), Official Student and Tutor in Ancient History at Christ Church, Oxford (1977-2002), Camden Professor of Ancient History and Fellow of Brasenose College 2002-10, Principal of Brasenose College (2010-5). He Director of the Centre for the Study of Ancient Documents, University of Oxford. He was President of the Society for the Promotion of Roman Studies (2001-5) and is Vice-President (Humanities) of the British Academy (2013-7).