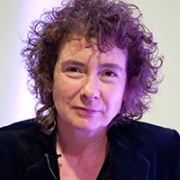 Jeanette Winterson is an award winning writer whose credits include the Prix d’argent from Cannes for Best TV screenplay Oranges Are Not The Only Fruit and a BAFTA for Best Drama. She is currently adapting her novella The Daylight Gate for Hammer Horror. Her memoir, Why Be Happy When You Could Be Normal is an international bestseller. Her work is published around the world in 20 languages. Jeanette is Professor of Creative Writing at The University of Manchester’s Centre for New Writing, where she hosts a series of high-profile public events. She is currently pioneering a Screenwriting MA with the film producer Tanya Seghatchian (Harry Potter, My Summer of Love).

Jeanette Winterson will be in conversation with Oscar and BAFTA-nominated screenwriter Patrick Marber.

Marber is one of a cross-over generation of writers such as Lee Hall (Billy Elliot) who move between writing for stage and film.

This illuminating discussion will use clips from Marber's film work to focus on cross-over writing, writing for female characters, differences between stage and screen work, writing short films, the commercial demands of the big screen, success and writer’s block, depression and creativity. Patrick Marber started out as an actor and stand-up comic working for TV and radio. His first play, Dealer's Choice, set round a game of poker, won the London Evening Standard Award for Best Comedy in 1995. In 1997 his play Closer became a national and international hit, winning the Lawrence Olivier Award for Best New Play and going on to be staged in 30 languages. Marber’s big screen transition happened in 2004 when he adapted Closer into a film starring Julia Roberts, Natalie Portman, Jude Law and Clive Owen. He was nominated for a BAFTA and a Golden Globe for his screenplay. Closer was also nominated for Best Motion Picture. The movie grossed over $100 million. In 2006 Marber’s adaptation of Zoe Heller’s novel, Notes on a Scandal, was nominated for an Oscar, a Golden Globe and a BAFTA for Best Adapted Screenplay. Starring Judi Dench and Cate Blanchett, and with a score by Philip Glass, the screenplay focused on the obsessive nature of desire and revenge – home territory for Marber. Other screenplays include Asylum – adapted by Marber from his own novel and starring Ian McKellen and Natasha Richardson, and the soon to be released Fifty Shades of Grey, where Marber was brought onto the project to add depth and character. Marber has also adapted Strinberg’s Miss Julie for the BBC (After Miss Julie) – moving the action to 1945. His 15-minute film, Love You More, was directed by artist Sam Taylor Wood and featured two songs by the Buzzcocks, including a cameo appearance by lead singer Peter Shelley.

Tickets are available from www.cornerhouse.org