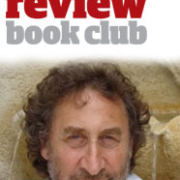 Howard Jacobson will discuss his ninth novel, Kalooki Nights. Max Glickman is a Jewish cartoonist, born and raised in postwar Crumpsall Park, Manchester. His father is a boxing enthusiast and his mother hosts glamorous, if rowdy, games of kalooki (a card game similar to rummy “much favoured by Jews (though not all Jews would agree) on account of its innate argumentativeness"). As a child he is fixated on the Holocaust and 20th century Jewish history, but as an adult he moves away, and marries out of his religion. Following a reunion with childhood friend Manny, just released from jail having served a long sentence for gassing his Orthodox parents, he is drawn back into the world he thought he had left behind. A dark, uproarious and funny meditation on identity and belonging.

Hosted by John Mullan, professor of English at University College London, the Guardian's Book Club examines a book a month, via a weekly column in the Guardian Review, a live Q&A session with the author, and a blog-discussion of the featured novel. Mullan's first three columns discuss the book in question; his final column consists of a selection of your comments from the live event and the blog. To join our mailing list email book.club@guardian.co.uk.