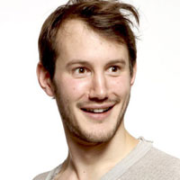 The Invisible Dot Ltd is one of the most exciting and innovative production companies in the country. Having worked extensively with cutting edge comedians Tim Key, Mark Watson, Daniel Kitson, David O'Doherty and Simon Amstell we are uniquely placed to to bring you the next generation of exceptional acts emerging through the Edinburgh Fringe and the London alternative circuit... So here, for the first time, is The Invisible Dot Tour; a snapshot of the most exciting and funny new acts in the country right now. Snap up your tickets quick!

JONNY SWEET - Highly acclaimed comic Jonny Sweet brings his award winning show to the Martin Harris Centre, John Thaw Studio with what he hopes will be a rip-roaring lecture about the recently decommissioned naval brigate the HMS Nottingham. “A delightfully silly and inventive hour” - THE OBSERVER

Edinburgh Comedy Award Best Newcomer winner. Writer and performer of his own Radio 4 series Hard To Tell and star of Channel 4's Chickens with The Inbetweeners' Simon Bird and Joe Thomas.