John Piper: The Mountains of Wales 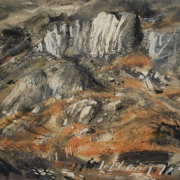 John Piper began to draw and paint the landscape of North Wales in the middle of the Second World War. He was sent to Snowdonia in 1943 by the War Artists Advisory Committee, and rented a succession of cottages there between 1945 and 1956; two of them, at Maes Caradog and Pentre, situated in the awe inspiring glacial valley of Nant Ffrancon. For Piper, the result of this relocation was a shift from picturing the landscape of the lowland countryside to that of the sublime Welsh mountains. The large drawings and paintings that he made in Snowdonia are amongst his strongest works and tell of Piper’s close understanding of the landscape of that place, and his connection with the rock and sky surrounding him.

This exhibition has been brought together by the National Museum of Wales from the collection of a private owner who has built up a wonderful group of works focused on this subject. The Whitworth will augment the exhibition with its own dramatic work by Piper of The Slopes of Glyder Fawr, 1947.

The exhibition is organised by Amgueddfa Cymru – National Museum Wales, Cardiff. Supported by the Colwinston Charitable Trust the Derek Williams Trust and the Paul Mellon Centre for Studies in British Art. This exhibition is supported by Little Greene Paint Company the Whitworth's official paint sponsor.

The Whitworth also presents an exhibition of drawings and watercolours from its own historic collection that will showcase interpretations of the Welsh landscape. Exploring artists’ representation of this geologically dynamic landscape, the exhibition includes works by JMW Turner, David Cox and John Varley as well as a selection of rocks and minerals from Manchester Museum.