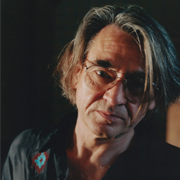 Alan Gillis is from Belfast, and teaches at The University of Edinburgh. Previously shortlisted for the TS Eliot and the Irish Times/Poetry Now Prizes, Maria Johnston describes his work as “heart-in-mouth stuff; high-impact poetry that is not for the faint-hearted.” His fourth book Scapegoat will be published by The Gallery Press in October. Allen Ginsberg described Tom Pickard as “one of the most live and true poetic voices in Great Britain." He founded the Morden Tower readings series in Newcastle in 1963 and his Ballad of Jamie Allan (2007), a poetic “life” of the eponymous eighteenth century outlaw, won the National Book Critics Circle Award. His Collected Poems, Hoy Oot, is just out from Carcanet.