Crying in the Chapel: Strangeways - An Inside Account by Stafford, Coghill and Clarke 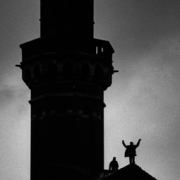 Crying in the Chapel: Strangeways - An Inside Account by Stafford, Coghill and Clarke

Ten years after it was first performed at Contact, Fink On return with theatre that pulls no punches in highlighting the conditions and the treatment of the inmates before, during and after the Strangeways riots of 1990.

'Audiences were shocked at how deeply it touched them. Jackpot!' **** Four stars - The Big Issue

BSL PERFORMANCES ON THU 6 MAY 2010: British Sign Language Interpretation is incorporated into each performance on Thu 6 May 2010.

POST SHOW CHAT BACK: There will be a chance to speak to the creative team immediately after the performance on Thu 29 April 2010. There will be an additional chat back on Thu 6 May 2010 which will be BSL interpreted.

ACCESS: We have a flat foyer entrance, ground floor access to our main theatre space and Contact Lounge, lift access to our other spaces and accessible toilets on every floor. Guide dogs can stay with you or be looked after by a member of staff. Just let us know when you book.

If you have any specific access requirements please call or text the Duty Manager on 07970 094 069.

Look for the EARLY or EARLY CO tabs on the booking forms if booking online at http://bit.ly/Buy_Tickets or ask a member of Box Office staff if booking over the phone at 0161 274 0600.

HALF-PRICE EARLY BIRD TICKETS ARE ONLY AVAILABLE FOR PERFORMANCES ON THU 29 AND FRI 30 APRIL - OFFER EXPIRES ON 28 & 29 MARCH.